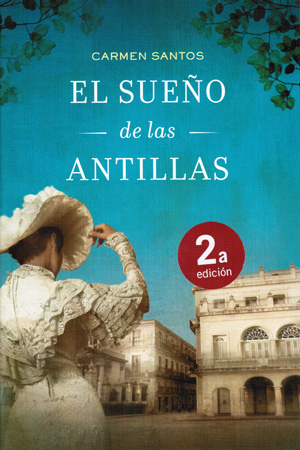 Dreaming of the West Indies

Dreaming of the West Indies takes the reader to the colonial Cuba of the 19th century, to tell him, through the eyes of young Valentina, about the experience that many Spaniards went through at the time, deciding to set off for the New World in search for a prosperous future. The plot starts out in 1858, year in which Valentina and her husband, both servants of the Marquises of Tormes in Madrid, decide to leave aside their life in Spain to embark first on the adventure to reach a coast village to the North with hardly any resources, to then embark on a boat that will take them, more than thirty days later, to La Habana harbor. Gervasio is as humble as dreamy, and Valentina simply follows him in his high aspirations and wealth dreams.

Little can she imagine what will come once the boat sets sail… She will have to overcome all kinds of obstacles, adapt to several changes, accept some decision that she would never have expected she could take, she will lose contact with some loved-ones of hers, she will be mislead and will have to learn from adversity in order to be strong and go on. The life that awaits her in Cuba will lead him to be called Calipso, but also also Galatea: several lifes in one, that of a Valentina that will bottom out but will also touch the top of a society enriched to an unthinkable extent with sugar crane cultivation, and with which the reader (specially she-readers) will emphatize from the very first pages.

An intelligent and engaging combination of historical novel and romantic novel, spiced with subtle hints of eroticism.